You are here: Products & Services / Aerospace

Our activities address both space and aircraft applications and include:

D-RAS allows to record between 1 and 4 analogue signals on a digital storage medium. The digital recording method prevents any degradation of the recorded signals. 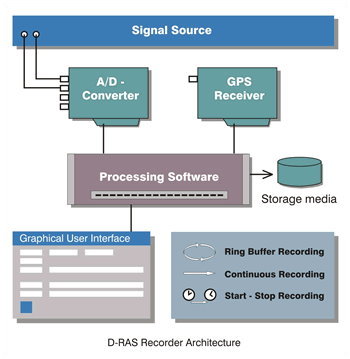 After the recording the data can be evaluated by the D-RAS analysis facility. The analysis functions can be customised to satisfy any particular evaluation requirements. As a basic means an oscilloscope display is provided which allows to view arbitrary intervals of the recorded signals in the time domain.

Two channels can be viewed simultaneously.

Navigation elements allow to navigate through the hours of recorded data and view any particular interval.

By means of search functions particular events or times can be found in the data sets. Dedicated search functions for more complex signal patterns can be implemented in accordance with customer requirements.