The following list provides examples of activities we have performed

The Universal Shipborne Automatic Identification System (AIS) has been
introduced some while ago. Based upon our experience in the Air traffic
Control testing and analysis business, we have developed software for the
testing of AIS transponders and of AIS installations.

The CIMS AIS Monitor permits the reception and analysis of AIS signals in two ways:

The AIS Monitor uses an independent receiver to receive the AIS signals on two frequencies. A list of received ship transponders is built and displayed for selecting a particular candidate for the display of the message data
contents.

After the selection of a particular ship, the message data of that ship is continuously updated and displayed thus facilitating the analysis and troubleshooting in case of observed problems.

In parallel to the display of selected ship data on the user interface, the message data of all ships received is checked for consistency (e.g. indication of speed while reporting moored). Those AIS stations which seem to report inconsistent data are flagged in the list of received stations. In parallel a detected inconsistency will be logged with a timestamp and a report of the inconsistency. This permits later analysis for typical problems and also the identification of ship installations with potential deficiencies

The basic setup is shown in the following figure: 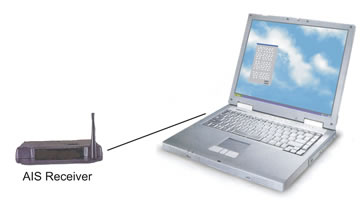 The PC software controls the receiver and decodes the received data. The software runs under Win NT / 2000 and XP. 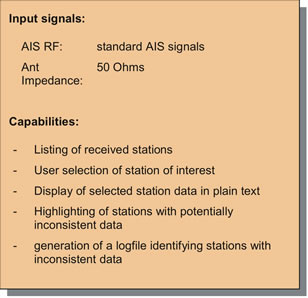 The user interface is shown in the following figure: 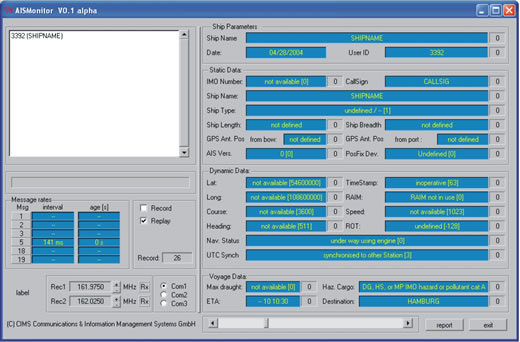